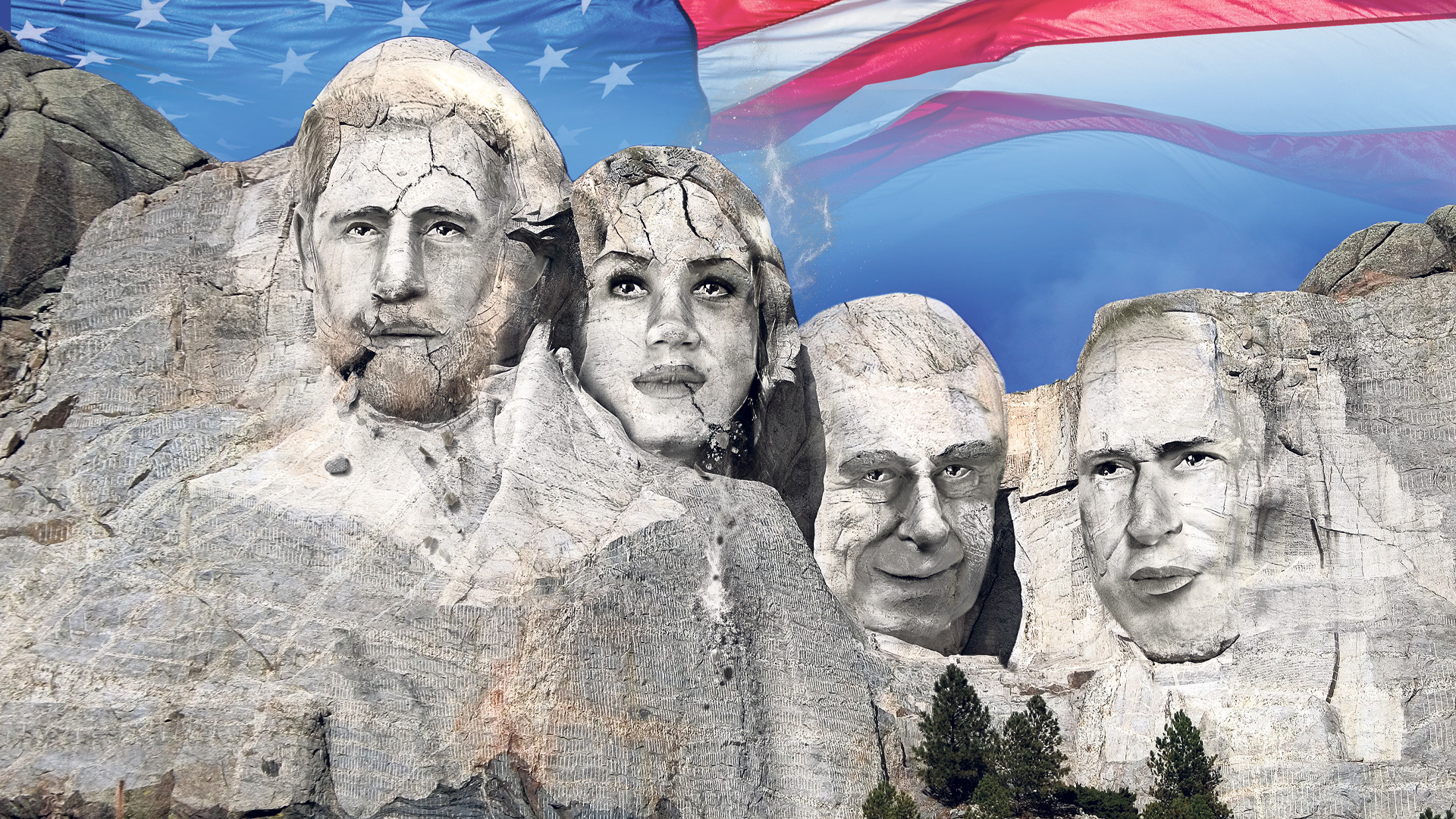 THE against-all-odds love affair between a British prince and a Californian actress was the most special of special relationships — and at first, Americans lapped it up.

Even while opinion in Britain soured, Prince Harry and Meghan Markle could bank on a groundswell of support in the US, where Americans were thrilled to see one of their own first marry into, then try to revolutionise, the Royal Family.

But all that seems to be changing — and The Sun has seen it first hand after speaking to ordinary Americans across the country.

The more the couple say, the less America seems to like it.
An exclusive poll for Newsweek magazine last week showed that Prince Harry has dropped 45 points in United States public opinion, while Meghan has dropped 36 points — in just one month.

Their plummeting popularity coincides with the publication of Harry’s memoir, Spare, and the associated media blitz taking in multiple high-profile interviews.

A month before the launch of the book — which became the fastest-selling non-fiction book ever, shifting 1.4million copies in its first day of release — Harry had an approval rating of +38, which has now dropped to -7.

And while media coverage of the couple since Megxit has largely been fawning, the tide has been turning.

American PR expert Eric Schiffer claimed that Harry’s reputation was on the brink of “spontaneous combustion”.

So what’s going on? The Sun travelled the length and breadth of the US to speak to ordinary Americans about what they thought of Harry and Meghan.

“I didn’t like this sort of ‘truth’ — it is over-sharing,” said Patricia Bardaghaiw, 56, a novelist from Connecticut.

“I could have done without the frozen penis. But that’s our society now.”

In Memphis, Marlon Bradford, 49, agreed. “Harry should have recognised he’s not like the rest of us and not exposed all that dirty linen.

“It’s an ugliness we don’t really want to see, even though all families have that side to them. It’s made so many people uncomfortable.”

Even Bethenny Frankel, 52, a former Real Housewives Of New York City star, who made a living by letting cameras into her private life, said disdainfully: “How much more? I mean, what’s next?”

The Newsweek survey found that almost half of Americans (44 percent) said Harry was wrong to include details of private family conversations in his book.

And that is in a country where, as the New York Times put it, “it’s wrong for someone else to invade your privacy, but it’s perfectly fine — even applauded — to exploit your own.”

Patricia Lavelle, 42, an immigration lawyer from Brooklyn, said: “I’ve tried to give Harry a lot of grace given he has been through a great deal of trauma.

“But you just don’t do this to your family.”

Perhaps this level of queasiness is because of the way Harry’s eye-popping revelations about private conversations, petty squabbles and his sex life contrast with the duty and decorum that characterised his grandmother The Queen’s reign.

“Meghan and Harry have destroyed the Royal Family’s image and now they have to put it together again,” said 66-year-old Sheila Jones, an saleswoman from Danbury, Connecticut.

“I certainly will buy Harry’s book, but I have to say I’m embarrassed by it.”

That sense of embarrassment is common in the US, where 68 per cent of the population said they admired the late Queen and 29million awoke before dawn to tune into Harry and Meghan’s 2018 wedding.

Where once there were hopes for a sort of American infiltration of the crown, with Meghan proving America’s superiority by being a very modern princess, there is now a sense she has let the side down.

Daisy Graham, 21, from Memphis told us: “I love the British Royal family.

“Before the book, I was very pro-Meghan Markle. But now I have an issue with them, they seem so whiny.

“They have all this privilege, but still whinge about it. It makes me think, ‘Come on, grow up’. It’s like they’re telling us they have all this nice stuff but she’s moaning about wearing a certain colour to an event. I mean, really?”

Harry also seems to have squandered the respect he held in the US for his service record, thanks to his careless description of killing 25 Taliban fighters like “chess pieces”.

Eric Winkler, 22, a former US Army serviceman from Memphis said: “I served in the military. I have had a lot of respect for Prince Harry because he served his country, especially as he was born into wealth and privilege.

“But in the book, he talks about killing 25 Taliban. Now look, I don’t care if you are Prince Harry or David Goggins from Iowa, that is not something you should glorify. Harry did that and it wasn’t right.”

Eric and Daisy weren’t the only young people to say they had become disillusioned with the couple.

But there were still some young fans among the people we spoke to.

A 24-year-old musician from Connecticut, who goes by the name Bryandt, told us: “Most people my age admire Harry for his honesty.

Indeed, it seems that the Sussex question has become yet another battle line in the US culture wars, with differences of opinion tending to divide along political, generational and ethnic lines.

We found the strongest support for the couple in Atlanta, Georgia, where 46 per cent of people are black.

Alicia Newton-Hardnett, 66, said: “I love Harry and Meghan. I’m glad that they are here in the US, that they are free and they have a chance to live their best life.

“I think they are only controversial to people who would deny their experiences are real.

“Unfortunately, colour does still matter and for those who don’t want to change or look at it, I guess they’re probably upset.”

Meredith Walker, 34, added: “I think it’s right for them to be this outspoken because the royal family have done a lot of bad things.

“Just look at Diana and how she was treated. I think that kind of thing needs to stop, especially if UK taxpayers are paying for their lifestyle.”

But Harry and Meghan’s attempts to be “activists” taking on colonialism, racism and oppression rings hollow for some.

Cecilia Victor, 59, a diversity head from Los Angeles, said: “I see what Meghan was trying to do, but it was a missed opportunity for her.

“If she had remained a princess, she could have done more for diversity.

“She declined to do it. However, she acts very regally for someone who doesn’t want to be regal.”

While the Americans we spoke to were mostly happy to share their opinions, we also encountered a significant weariness with the subject, and indifference.

“Nobody I know is talking about the royals,” said Jim Dugay, 50, from Atlanta.

“The Netflix special isn’t on my watchlist and I won’t read the book. We have our own political things to follow here.”

And Danny Cott, 27, a sous-chef from Los Angeles, said: “I don’t think we need to pay that much time and attention to it anymore.”

And that should worry Harry and Meghan more than any negative opinions, because it’s hard to keep making money from your story if no-one wants to listen any more.

PR expert Jeffrey W. Schneider warned: “It’s overload. There’s been a lot about them, and now there’s a lot more.

“While people’s fascination has always been pretty high, maybe there is a natural limit to that.”

The Sussexes had hoped their two-year campaign of truth-telling, from Oprah and Netflix to podcasts, talk shows and the tell-all memoir, would win hearts and minds in America.

But if all they have managed to do is exhaust them, it begs the question — what on earth will they do next?