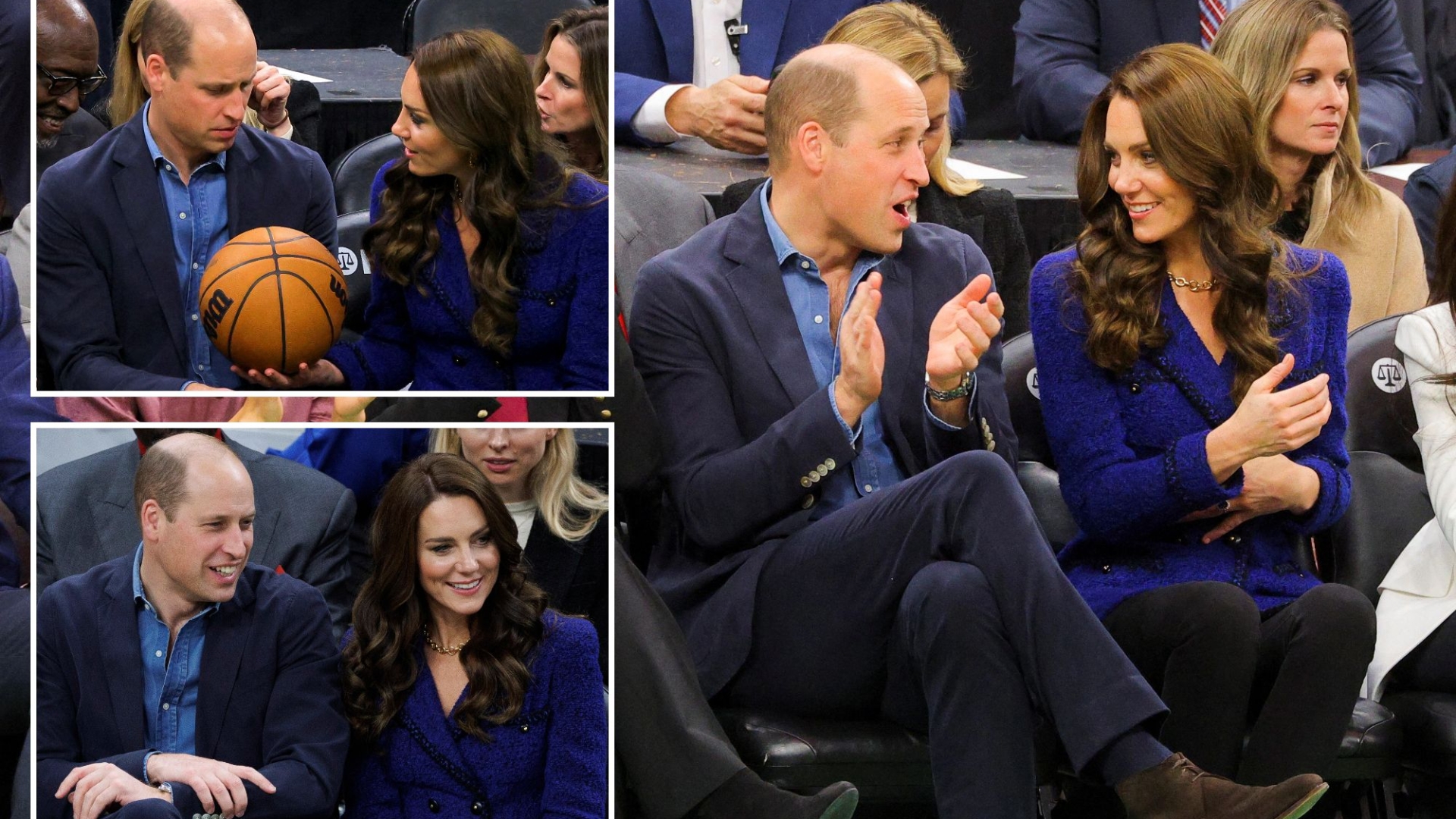 PRINCE William and Princess Kate beamed as they took their seats courtside for an NBA game at the start of their royal tour.

The couple jetted to Boston, US, on Wednesday to kick off a three-day whistle-stop trip – arriving to massive cheers from crowds.

The couple sat courtside for the NBA game[/caption]

Kate and Wills grinned as they watch the match[/caption]

They took selfies with fellow spectators[/caption]

After landing in the pouring rain, the Prince and Princess of Wales joined 20,000 basketball fanatics at the Boston Celtics clash against Miami Heat.

The pair were due to leave during the game but stayed until the end to see the Celtics shoot to victory.

They grinned as they sat down beside Massachusetts Governor-Elect Maura Healey and Boston Mayor Michelle Wu at the TD Garden stadium.

Wills was then snapped looking puzzled as Kate held a basketball and chatted to him.

The royal pair stood for the national anthem The Star Spangled Banner, which was belted out by a semi finalist of season 10 of reality tv series The Voice.

They were also pictured beaming as they took selfies with fellow spectators.

But later the couple were subject to small pockets of boos around the arena when they were introduced by a stadium announcer and shown on the big screen.

Kate, 40, stunned in a bright blue jacket and trousers, while Wills, also 40, wore a navy suit.

Kate and Wills were seen cheering the high-scoring game and clapping points as the packed crowd ramped up the atmosphere for the seventeen-time World Champions took on the Miami Heat in downtown Boston.

The Boston Celtics’ name was inspired by the Original Celtics, a well-known basketball team that had been created by Irish immigrants in New York earlier in the 20th century, before folding in 1930.

Others fans in the crowd could be heard loudly cheering “USA, USA” when the Prince and Princess appeared on the screens in the centre above the court.

The royal couple were seen cheering the high scoring game and clapping points as the packed crowd ramped up the atmosphere for the seventeen-time World Champions took on the Miami Heat in downtown Boston.

During several intervals in the game there were moments nodding to the arrival of Prince William’s Earthshot Prize environmental project which will be hosted in the city on Friday.

Before the game tipped off the royals met members of the ‘Celtics family’, including representatives of the Boston Celtics Shamrock Foundation, which provides grassroots programming and strategic funding to local organisations serving at risk or at need populations.

Around the stadium digital advertising boards were lit up green to promote the awards while spectators were treated to a promotional Earthshot video ahead of the game.

After the second quarter with the game tied 47 all, William and Kate watched as the Celtics honoured their long-standing tradition of recognising a “Hero Among Us”, heralding individuals working to positively impact the community.

Ollie Perrault, a 15-year-old climate activist from Easthampton, Massachusetts, got to meet the royal pair after being cheered by the local crowd for her work as a leading member of the Youth Climate Leadership Program since she was 11.

She is now the founder and director of Youth Climate Action Now, committed to fighting for environmental justice, advocating for an intersectional system change, and working to get more young people involved in direct climate action.

Royal aides suggested the royal couple would depart after the third quarter of the game but they decided to stay until the end, shaking hands with fans as they left.

Kate earlier wowed in tartan Burberry dress, an Alexander McQueen jacket, and earrings by the sustainable brand Shyla London as they greeted fans outside City Hall.

Addressing the waiting crowds, Wills said: “Thank you to the hardy Bostonians for braving the rain.

“Catherine and I are absolutely delighted to be with you today, for our first engagement in the great city of Boston, as we start the count down to The Earthshot Prize Awards this Friday.”

The tour will culminate in Wills presenting the £50million Earthshot prize for contributions to environmentalism.

He added: “We cannot wait to celebrate The Earthshot Prize Finalists later on this week, and we are both looking forward to spending the next few days learning about the innovative ways the people of Massachusetts are tackling climate change.”

The royals were welcomed to the city by Mayor Wu, the first Asian American to hold the role.

The three-day international trip is their first since becoming the Prince and Princess of Wales.

It culminates at the MGM Music Hall on December 2 for the Earthshot do, described by one insider as Wills’ “Super Bowl” moment.

It comes after Prince William’s team slammed his godmother after she resigned following a race storm at Buckingham Palace.

Kensington Palace said the ordeal was “really disappointing” and that it was “right” Lady Susan Hussey had stepped down.

Kate laughed as Wills clutched a basketball on his lap[/caption]

The royal pair stood during the national anthem[/caption]