A TIKTOKER has done a Skims try-on haul and revealed which pieces she loved from the collection.

The results were pleasantly surprising on a 34DD, size 10/12 shape.

Lyss tried on several bras, camis, and bodysuits during her haul[/caption]

“For reference, I’m a size 34DD on top, always wear large tops. And on the bottom, I’m normally like a size 30,” @alyranieri29, also known as “Lyss,” briefed the beginning of her video, letting users know which sizes she wears.

After seeing the Skims sculpting bra all over TikTok, Lyss got it in two different shades.

In the small or medium, she recommends it for its body-hugging shape and sheerness.

Next, Lyss tried on the Mock Neck Long Sleeve Bodysuit in the color “smoke.” 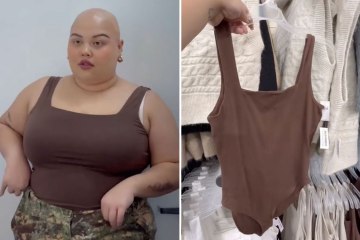 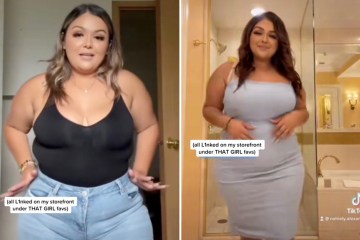 “I absolutely love this. I’m feeling like Miss Kim K herself.”

After switching it up with the Skims Essentials Cami in the shade umber, Lyss liked the result.

Because of its longer cut, she had to fold it up.

However, Lyss found this useful as it likely means she can easily tuck the cami into pants if she would like to.

The sculpting bra came in handy underneath this tank as well.

Lyss ordered the Cotton T-Shirt Bodysuit in the color soot.

While she stated that she was still “wearing the sculpting bra underneath,” she followed the confession with “I don’t think it’s necessary to have the bra underneath. It’s nice and tight.”

Skims also has an Essentials T-Shirt Bodysuit, which Lyss bought in onyx.

“There are no seams, like, anywhere,” she said of the garment.

It also appears to be hemless, having what Lyss describes as raw edges.

She mentioned that between the Cotton and the Essentials Body Suits, the latter is the “fancier” of the two.

For the finale, Lyss saved her absolute favorite, which was the Square Neck Bodysuit in neon orchid.

When she tried it on, her jaw literally dropped in surprise and delight for herself.

The bodysuit flattered Lyss’s figure, and one TikTok comment had to ask if she was “wearing the sculpting bra under the last” piece.

Lyss was happy to provide guidance.

“Not in the pink bodysuit,” she said.

Still, Skims delivers on their promise of support for larger chests as “I wore the sculpting bra under the others, however I wore the soot bodysuit the other day without a bra & felt comfortable!”