ALL eyes have been on Cristiano Ronaldo in recent weeks ahead of Portugal’s World Cup 2022 campaign.

The veteran superstar, 37, saw his contract with Manchester United terminated on Tuesday following his explosive interview with SunSport columnist Piers Morgan in which he tore the club to shreds, from top to bottom.

Now a free agent, Ronaldo is playing for his very future in football.

And with Fernando Santos missing a number of key men for the tournament in Qatar, they’ll need Ronaldo to be at his best.

Portugal have never won the World Cup. In fact, they’ve never reached a final, finishing third in 1966 and fourth in 2006.

Aside from those years, the nation has only reached the last 16 twice, with a fairly poor record on the biggest stage.

And they face a tricky campaign from the outset, going up against Ghana, South Korea and Uruguay in the group stage.

Progression to the knockout rounds is by no means a certainty – so SunSport takes a look at everything you need to know about them and their World Cup opener opponents Ghana.

Portugal: Forced to do it the hard way as they finished second behind Serbia in their Uefa qualification group, despite six goals from Ronaldo.

They beat Turkey 3-1 before winning their play-off final 2-0 against North Macedonia – who had earlier KO’d Euro 2020 winners Italy. 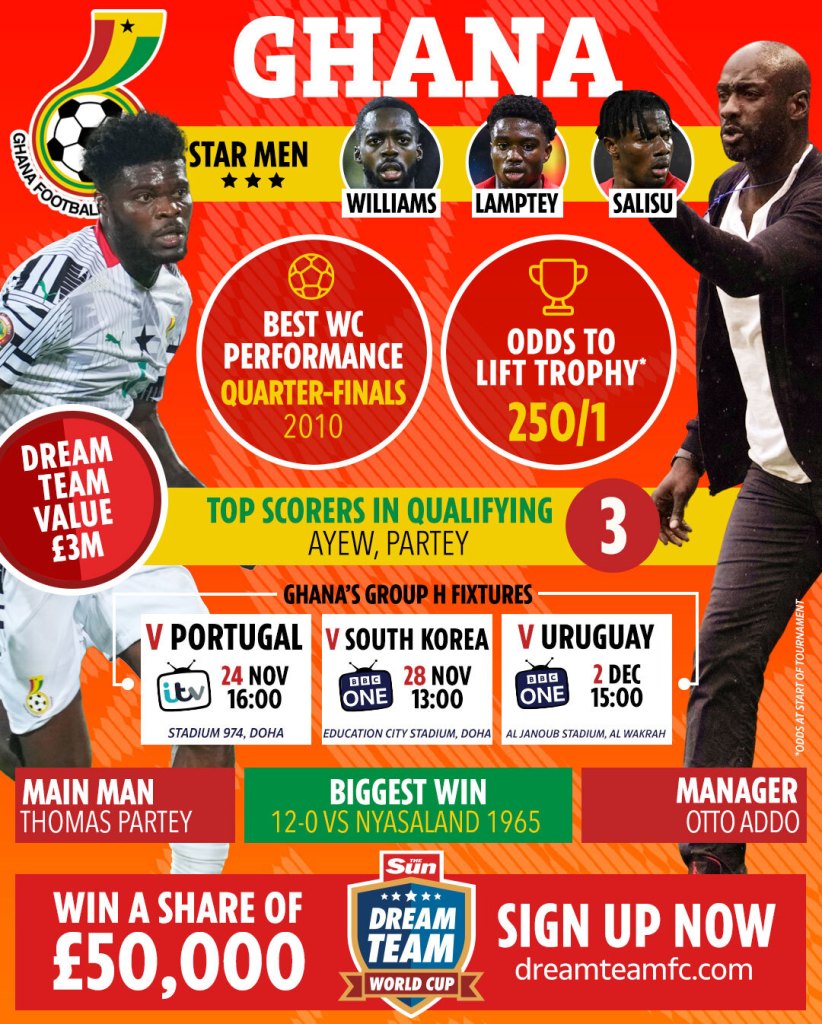 Ghana: Knocked out in the group stages of Afcon, qualification for the World Cup came in dramatic manner.

They topped their second-round qualifying group ahead of South Africa, Ethiopia and Zimbabwe before edging out Nigeria on away goals in their two-legged play-off to reach Qatar.

Portugal: Won their pre-tournament friendly 4-0 against Nigeria, but form has been patchy.

They won three of their six Nations League games – including 4-0 victories over Switzerland and Czech Republic.

But they also lost to the Czechs, as well as to Spain – to go with another draw with their neighbours.

You’re never quite sure which Portugal will turn up, but when they do, they’re near unstoppable. 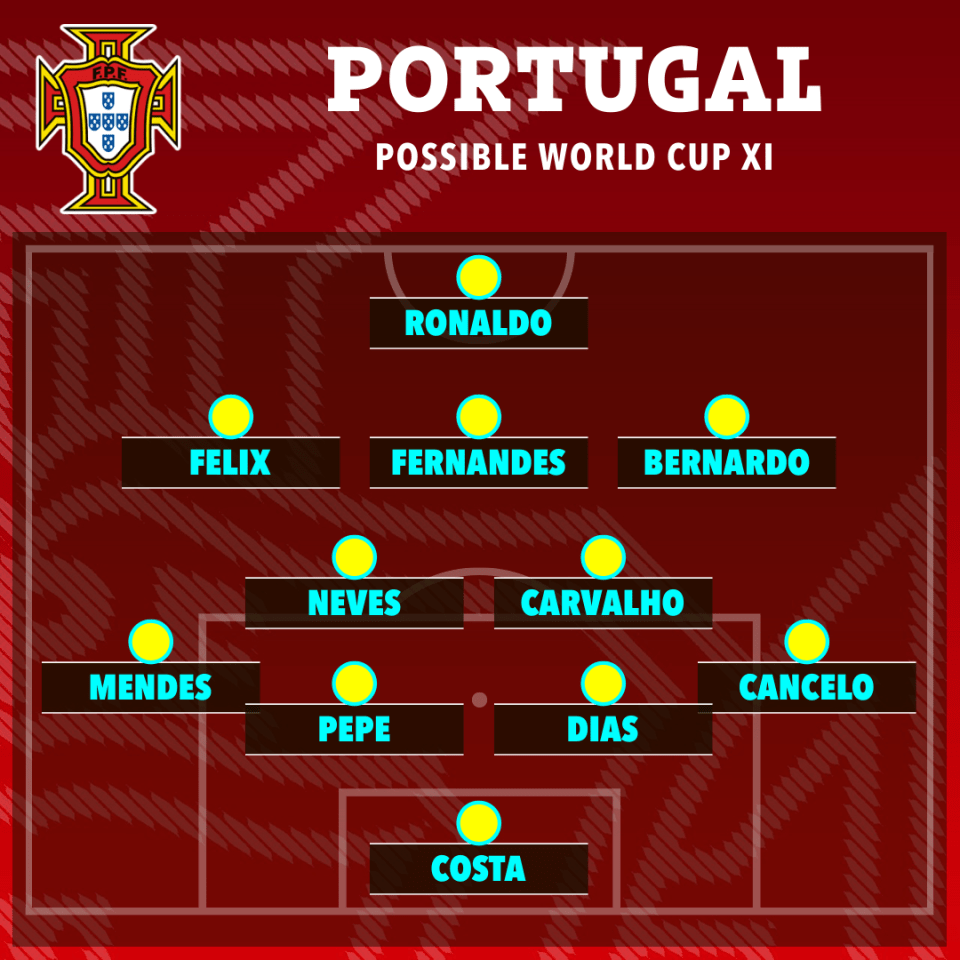 Ghana: It’s been a tough year, starting with a 3-0 battering against Algeria ahead of Afcon.

Things didn’t get any better in the tournament as they lost 1-0 to Morocco and 3-2 to Comoros, to go with a 1-1 draw with Gabon as they crashed out in the group stage.

Since then they’ve battled past Nigeria to reach the World Cup.

But even then it’s not all positive. They drew 1-1 with Central African Republic in their Afcon qualifier, following a 3-0 win over Madagascar.

They were then thumped 4-1 by fellow World Cup qualifiers Japan in this summer’s Kirin Cup semi-final, salvaging some pride with a penalty shootout win over Chile in the third-place play-off.

Since then, they’ve lost 3-0 to Brazil but beaten Nicaragua 1-0 and Switzerland 2-0… a real mixed bag.

Portugal: Fernando Santos – In charge of the nation for eight years and counting, Santos has been an international manager for over a decade, having managed Greece between 2010 and 2014.

Prior to that, he managed Porto, AEK Athens, Panathinaikos, Sporting Lisbon, Benfica and PAOK.

Santos knows what it takes to succeed on the big stage, too – having guided Portugal to the Euro 2016 crown. He also oversaw the 2018-19 Nations League victory. 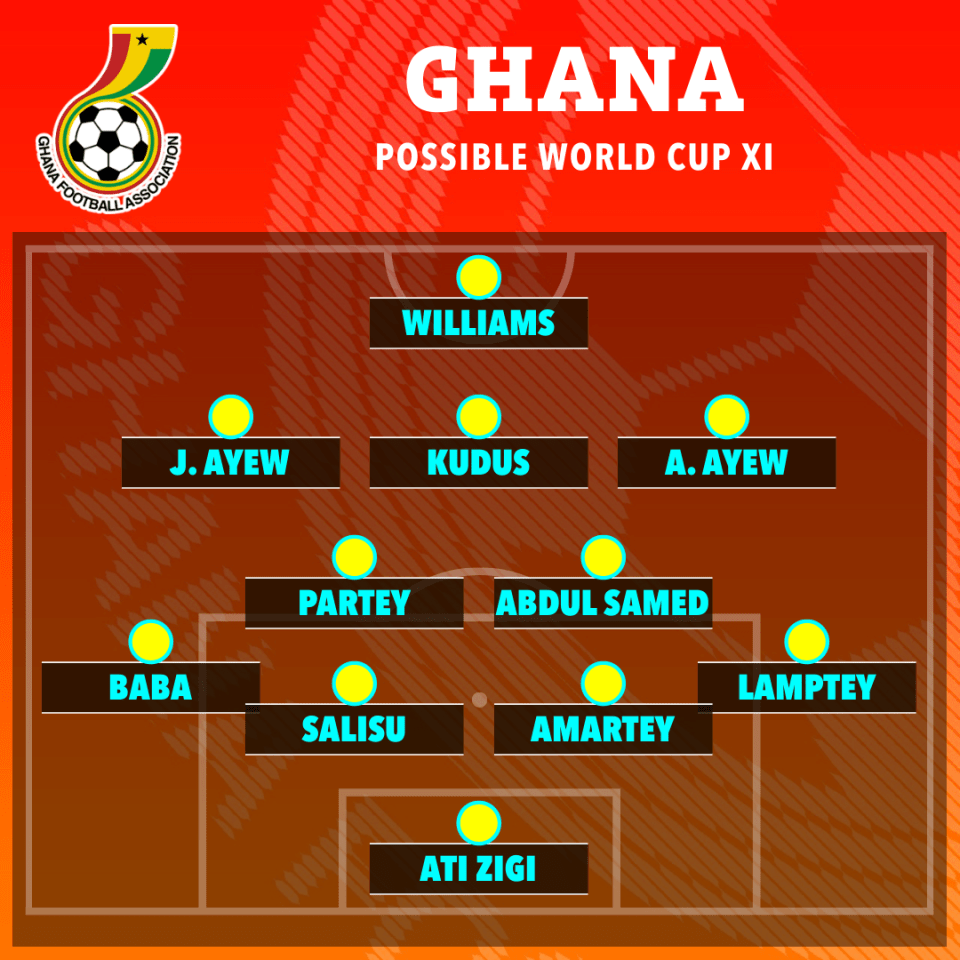 Ghana: Otto Oddo – Joined the national set-up in September 2021 as one of two assistant managers working under Milovan Rajevac.

However, the Serbian boss didn’t last long and German-born Oddo – who spent his playing days in the Bundesliga with the likes of Borussia Dortmund – was given the job.

Oddo was hired immediately before the double-header with Nigeria – and helped inspire their success.

However, he’s won just three of his nine matches in charge.

Previously, he’d worked as talent coach and then No2 at Dortmund following a stint as a scout for the Ghana national side.

Portugal: Guess who? We all know about Ronaldo’s talent and despite his on-running club drama.

He may no longer be in his prime but CR7 has got the ability to turn a match on its head singlehandedly.

A great mix of youth and experience with the likes of Rafael Leao and Pepe in the squad, too.

Ronaldo is the main man for Portugal but he’s more-than-ably supported by the likes of Bernardo, Fernandes and Felix[/caption]

Ghana: Arsenal star Thomas Partey is his nation’s main man, but the squad is chock full of talent.

Brighton whiz Tariq Lamptey has been named in the squad alongside the Ayews – Andre and Jordan.

LaLiga ace Inaki Williams is an exciting talent with just three international caps under his belt at present, with Ajax’s Mohammed Kudus one to watch.

There’s plenty of Premier League talent in the squad, too – including Mohammed Salisu and Daniel Amartey in defence.

The two nations have played just ONCE – with Portugal running out winners.

The Portuguese edged out a narrow 2-1 win in the group stage of the 2014 World Cup in Brazil, with Ronaldo on the scoresheet that day.

What TV channel will show the game?

The game will be shown live on ITV1 with kick-off at 4pm.

The game will also be available on ITV Hub.