DENMARK open up their World Cup campaign against Tunisia on Tuesday.

The pair have met once before in a pre-2002 World Cup friendly and are set to kick-off at 1pm UK time at the Education City Stadium, Al Rayyan. 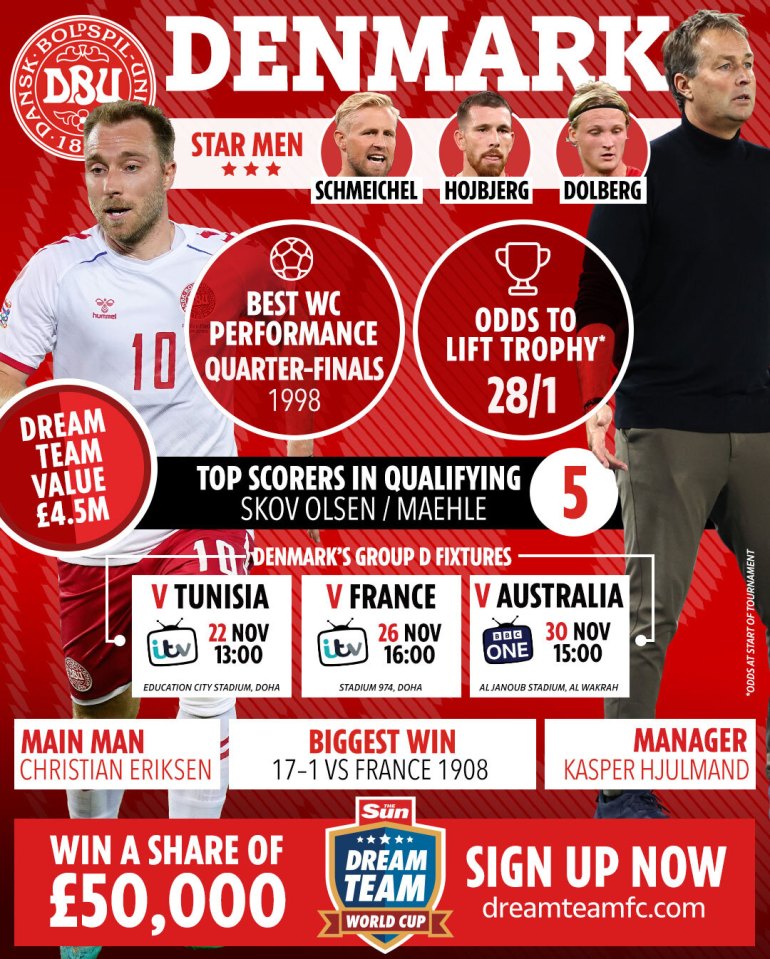 The Danes are looking to build on their excellent showing at Euro 2020, where they reached the semi-final before being knocked out by England.

Christian Eriksen will be a key source of inspiration and all eyes will be on the Manchester United playmaker following his scare at the Euros.

The midfielder suffered a cardiac arrest and had to be resuscitated on the pitch as his team-mates provided a protective shield around him.

Eriksen is now fit and healthy and ready for action in Qatar after being fitted with an ICD heart-starter device.

How they got there

Denmark: Won nine of their ten qualifying games to top Group F ahead of Scotland. 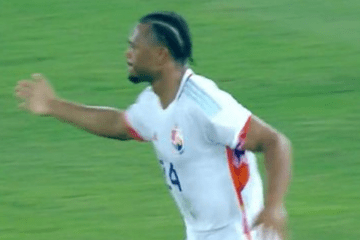 Tunisia: Beat Mali 1-0 in a double-legged World Cup play-off thanks to a hilarious own goal from Moussa Sissako, while the referee gave them a helping hand by controversially blowing early for full-time.

Denmark: Had a mixed showing in the Uefa Nations League, impressively beating France and Austria earlier this year but also losing to Croatia.

They also suffered a shock 2-0 loss to Scotland in the last game of their qualifying campaign. 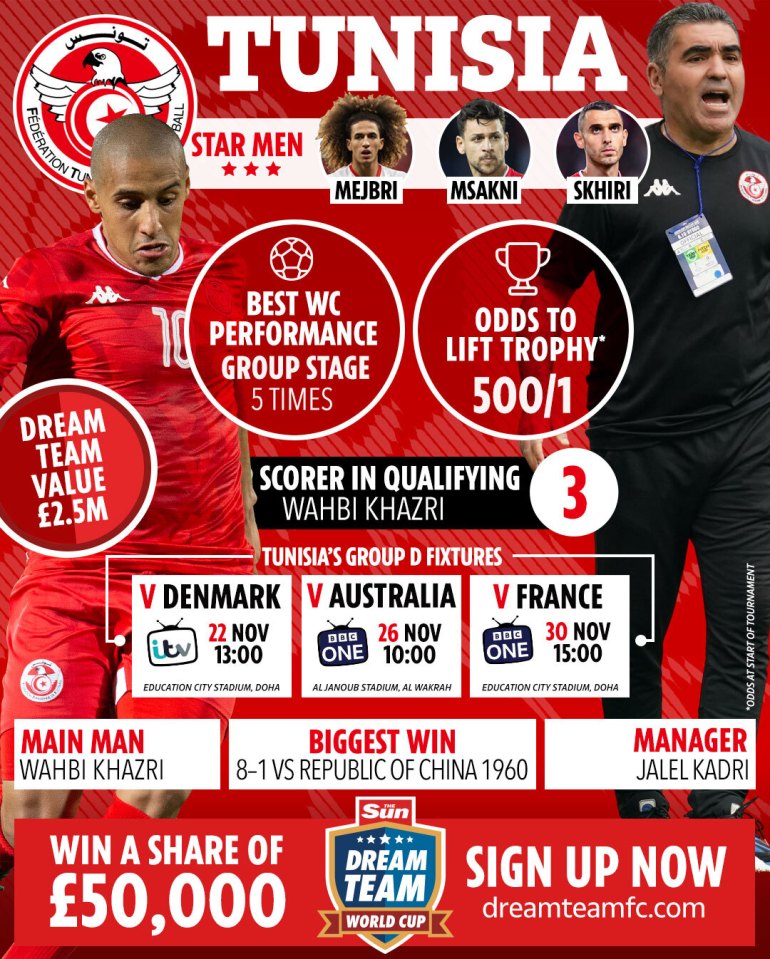 Tunisia: Jalel Kadri’s side looked far from their best in their two September friendlies.

First they struggled to overcome Comores in a 1-0 win before being thrashed 5-1 by Brazil.

They did manage to beat Iran 2-0 in a warm-up game before the tournament kicked off.

Star men to look out for

Denmark: Eriksen will pull the strings and create chances for hitman Kasper Dolberg, as will Tottenham midfield dynamo Pierre-Emile Hojbjerg.

That pair are likely to make up a midfield three alongside Dolberg’s Sevilla team-mate Thomas Delaney.

Denmark’s 4-3-3 formation served them well at the Euros and key men Kasper Schmeichel and Barcelona’s Andreas Christensen will be crucial to keeping things tight at the back.

Tunisia: Former Sunderland ace Whabi Khazri is the man they will be looking to keep quiet – the winger scored 24 goals in 71 games for Tunisia and helped his side reach the Africa Cup of Nations quarter-final last year.

United winger Hannibal Mejbri will also be looking to boost his profile on the international stage, if he can force his way into the starting XI.

Tunisia’s most capped player Youssef Msakni could pose problems on the left flank, and Ellyes Skhiri will be tasked with keeping a close watch on Eriksen.

What’s the head to head?

What TV channel will the game be on?

ITV will broadcast the match at 1pm on Tuesday.

To stream the game live, head to the ITV Hub.

Denmark are fancied by many as dark horses and should get their World Cup campaign off to a fine start.

Tunisia’s poor form means confidence could be low and we expect Denmark to take advantage.