JONJO SHELVEY revealed he only has to play three games next season to earn a new Newcastle deal.

The midfielder, 30, has been on Tyneside for six-and-a-half years and is desperate to stay.

He said: “I’ve got three games to get another year – I mean, I’d be a bit worried if I didn’t!

Toon lost 1-0 against German side Mainz in Kufstein to end their pre-season tour in Austria. 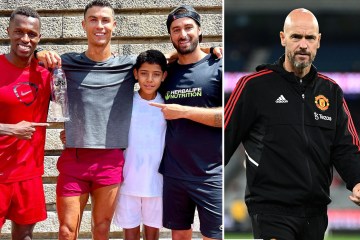 Dream Team’s BACK! All you need to know before you go for £100k prize pot

Kieran Trippier played a free-kick at an opponent thinking he was within 10 yards but the ref played on, with the Bundesliga outfit breaking to bag the only goal.

Shelvey did not start against Mainz but he was part of the starting eleven for the 3-0 win over 1860 Munich last Friday.

And he will likely have an important role to play for Eddie Howe next season and will battle Bruno Guimaraes, Joelinton and Sean Longstaff for a midfield place.

Howe is a huge fan of Shelvey and praised his defensive work and his passing range at the end of last season.

He said: “Certainly since I have come in I have seen a real maturity in Jonjo (Shelvey).

“I have seen somebody who is very, very focused on his football. He wants to do very well for himself and for the team. He is a huge talent.

“His technical talent is huge. He has an array of passing that I have not experienced before. He can see – and deliver things – not just see, that not many players can. I think defensively he has been outstanding for us.

“The amount of times he has put himself in the right position to stop a dangerous moment or transition back or sprint back or clear a dangerous ball for us has been huge.”